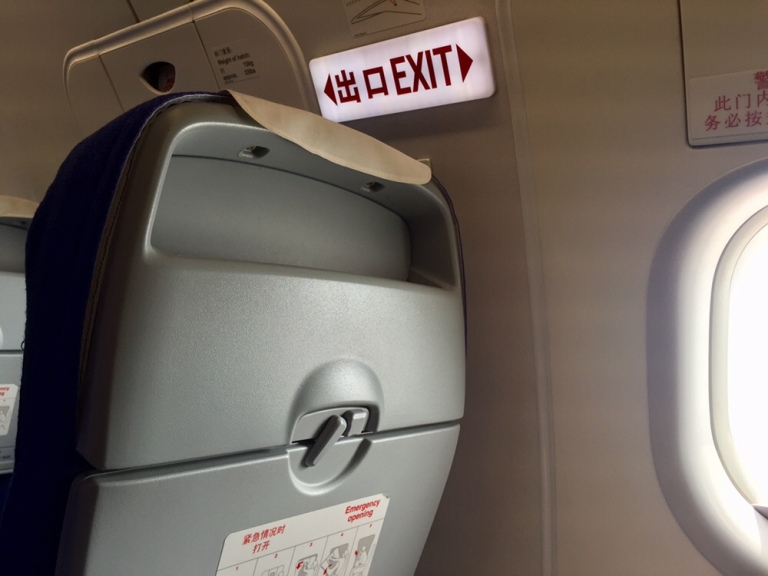 I am sitting in Emergency Exit row middle seat 10E on this Shenzhen Airlines Airbus A320 flight to Shenzhen.

There were no aisle seats left so opted for a middle seat in the EE row that gives me additional legroom. Although I normally would never choose a middle seat, this is an exception.

There is no in-seat entertainment so I watch the new Will Smith sci-fi movie on Netflix – ‘Bright’ which I have downloaded to my iPad. It turns out to be utterly ridiculous.

Drink service starts and I ask for a Diet Coke or Zero. The flight attendant tells me they only have Pepsi. Normal Pepsi with sugar. I say no thanks – can I have a coffee? She gives me a coffee but it is a 3-in-1 full of sugar. After a sip I give it back. Pretty surprising they don’t cater for basic drink requests on a full-service airline…

I have pre-ordered a Seafood meal on this flight and it is one of the first to come. It consists of exactly the same seafood meal that Thai Airways often serves; a seafood fettuccine in a gluey pasty white sauce with vegetables. Not good. I don’t touch the fettuccine noddles or the bread roll; instead pick at the seafood and vegetables and fruit.

Nothing much else to add except we land on time and the sunset from the bus that takes me from the plane (annoying) to the terminal is nice.