I am flying on a Thai Airways Boeing 777-300 in seat 31B, a bulkhead aisle seat right in the first row of Economy class.
The positioning of the bulkhead row gives me ample leg room to stretch throughout the entire flight. As it is a bulkhead, the audiovisual screen is inserted into the side of the seat, meaning I cannot extract it until the seatbelt signs are off after take-off.
The plane seems to be relatively full and I am considerably lucky to have this seat as when I originally did my online check-in It want available (it is a priority seat at an additional charge, but when I printed my boarding pass at the check-in kiosk at the airport, the seat was available for free so I grabbed it! Airlines review sites such as seatguru.com often warn that these seats are narrower than ‘standard’ seats but being relatively thin myself 😜 it is not a problem. 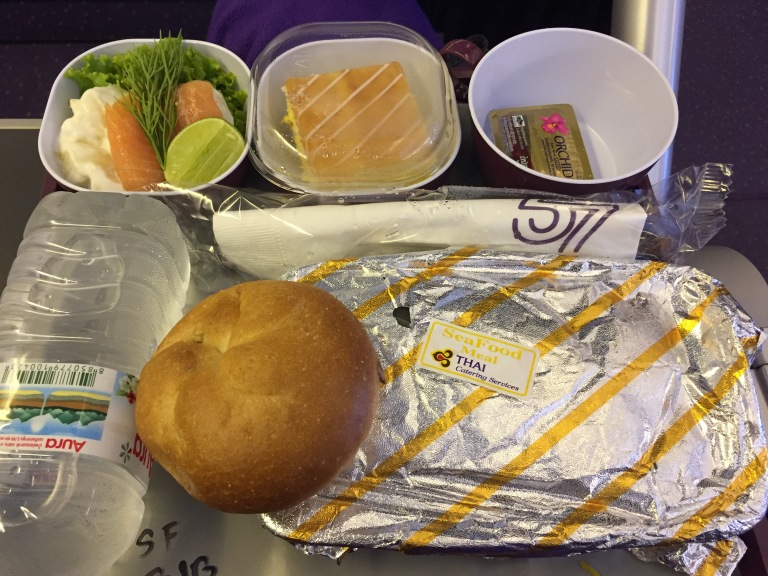 I have ordered a seafood meal and an unshaven male (5 o’clock shadow) flight attendant comes over and confirms my order with a smile. It funny how appearance doesn’t seem to be a big part of Thai Airway’s persona – often their shoes are unpolished and hair unkempt. Not a biggie – just an observation. 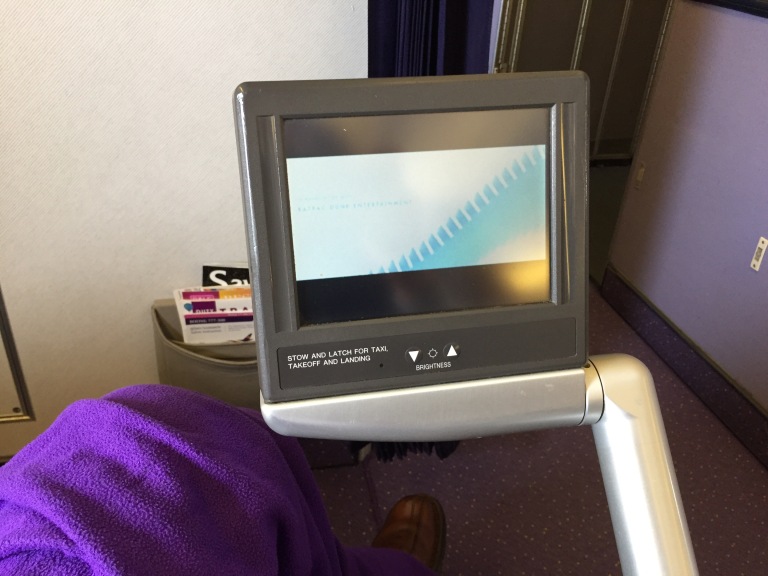 Before the seatbelt sign is extinguished, I pull out the tiny video screen – it is literally smaller than my iPad. I watch a new movie, “Collateral Beauty” with Edward Norton and Will Smith, Helen Mirran, Kiera Knightly, and a strong cast of others.
Soon after, a hot wet towel service begins, followed by my seafood meal. As with all pre-ordered meals, my is one of the first to come out. It is pretty good. Smoked salmon and potato salad, seafood morney, pasta and vegetables, and a cake of some sort. I uncharacteristically enjoy this with a glass of white Chablis. I save my cake to enjoy wi h a cup of coffee – it is served with hot milk. It’s actually delicious – a creamy custard-like sponge cake. But jeez – the carb count with this meal is through the roof!
The flight is only just over two hours and although we departed later than scheduled, we arrive on time.
Rating: 8.75/10